Where Will AMD Be in 5 Years?

Advanced Micro Devices (AMD -2.54%) has grown rapidly over the last five years, recording terrific growth in its revenue and earnings thanks to market share gains over Intel (INTC -1.70%) in the client and server processor markets, as well as its presence in fast-growing niches such as gaming consoles.

AMD’s impressive top- and bottom-line growth has translated into solid gains for investors as well. The stock has beaten the broader market handsomely over the past five years despite crashing over 40% in 2022. But does this massive pullback mean that investors should buy AMD stock and hope that the chipmaker replicates its fine form over the next five years as well? 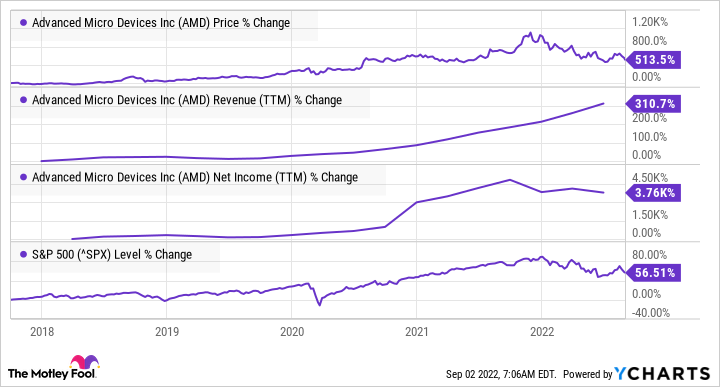 Let’s check where AMD may stand after five years and find out if buying this beaten-down semiconductor stock is a good idea.

AMD could become a bigger player in these markets

AMD’s chips power personal computers (PCs) and data centers, and the company is enjoying outstanding growth in both these markets.

The client segment was AMD’s largest source of revenue in the second quarter. It generated $2.2 billion in revenue, an increase of 25% over the prior-year period. The impressive thing to note here is that AMD saw strong growth in sales of processors that power notebooks and desktops at a time when the broader PC market is in terrible shape.

IDC reports that PC shipments fell 15.3% year over year in the second quarter as demand weakened. But the average selling prices (ASPs) of AMD’s processors increased. Shipment volumes also increased thanks to another quarter of market share gains over Intel. AMD says that it has gained client processor market share for nine straight quarters, which is not surprising given its stronger product lineup.

The PC processor market reportedly generated $88 billion in revenue in 2020, and the figure is expected to jump to $117 billion in 2027. AMD looks set to corner a bigger chunk of this massive opportunity thanks to the technology lead that it enjoys over Intel. The company has just announced its latest Ryzen 7000 processors based on the 5-nanometer (nm) Zen architecture. These new processors could widen the gulf between AMD and Intel, as the latter will remain stuck on a 10nm process node when it launches its Raptor Lake chips later this year.

AMD’s smaller process node means that the transistors on its chips are packed more closely together compared to the transistors on Intel’s. As a result, AMD’s chips are likely to be more powerful and power-efficient, as packing more transistors into a smaller area allows a processor to carry out calculations faster and heat up less. So AMD looks set for more market share gains in client processors, and that it should play a key role in the company’s growth over the next five years.

Intel is expected to release its Sapphire Rapids chips in the first quarter of 2023, while some parts may only see the light of the day in the second half of the year. This gives AMD the opportunity to gain more share against Intel in the lucrative server processor market, especially considering that it will be based on a 10nm process. AMD’s upcoming server processors, on the other hand, will be based on the 5nm manufacturing process.

More importantly, AMD is all set to push the envelope further in client and server processors with the launch of 4nm and 3nm chips by 2024. So it wouldn’t be surprising to see AMD become a bigger player in these markets by 2027, paving the way for robust long-term growth in the company’s top and bottom lines.

AMD supplies semi-custom chips to video game console manufacturers such as microsoft, Sony, and Valve. This is the reason why the company’s gaming business recorded 32% year-over-year growth in Q2 to $1.7 billion despite a decline in graphics card revenue.

Meanwhile, AMD’s new gaming console client is also gaining solid traction in the market. Valve’s Steam Deck console uses AMD’s semi-custom processor, and the company is said to be increasing production of the same to meet the growing number of reservations for the device. As such, AMD’s console business should remain in healthy shape over the next five years.

In all, there are signs that AMD could continue clocking terrific growth going forward. Not surprisingly, analysts expect 27% annual earnings growth from the company for the next five years, which is why it may be a good idea to take advantage of the slip in AMD’s stock price since it could deliver healthy long-term upside.