The WD Black SN850X NVMe internal solid-state drive (starts at $159.99 for 1TB; $289.99 for 2TB as tested) is an upgrade to Western Digital’s high-performance PCI Express 4.0 gaming SSD, the SN850. It improves on an already excellent SSD by giving buyers the option for a 4TB version (it’s $699.99) and an upgrade in flash memory that increases sequential read and especially write speeds. Its improved benchmark results in both gaming and general storage tests make the SN850X an easy Editors’ Choice pick as a premium M.2 SSD.

Oomph in the NAND: An Upgrade With Real Punch

The SN850X is a four-lane PCI Express 4.0 drive employing 112-layer TLC 3D NAND flash memory (versus the 96-layer TLC NAND flash of the SN850). It’s manufactured on an M.2 Type-2280 (80mm long) “gumstick” printed circuit board and uses the NVMe 1.4 protocol over the PCIe 4.0 bus, with a homegrown WD/SanDisk controller. (New to M.2 and PCIe jargon? Check out our guide to SSD terminology.) 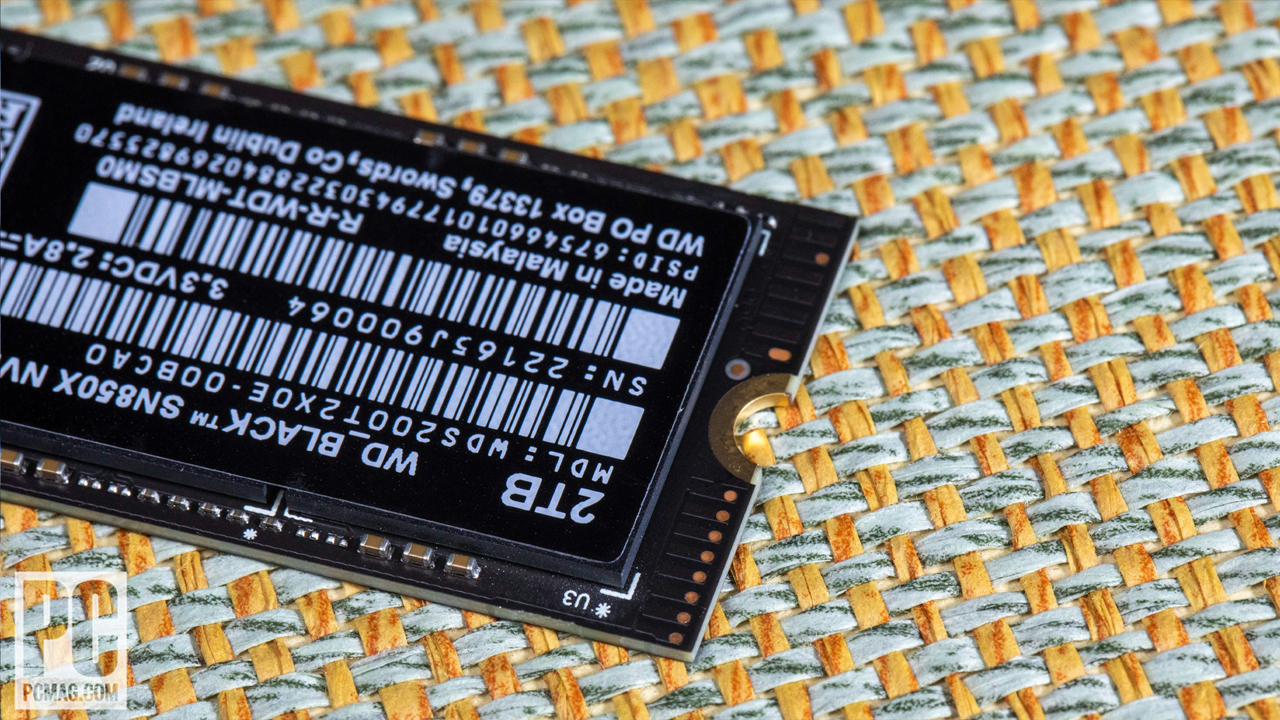 As mentioned, the WD Black SN850X is offered in 1TB, 2TB, and 4TB capacities. You can get the 1TB and 2TB versions with an attached heatsink, compact enough to fit in the secondary M.2 slot of a Sony PlayStation 5. The heatsink is equipped with RGB lighting, customizable via the WD Dashboard utility (and, of course, visible if you’re installing it in a desktop PC with a glass side panel, rather than sealed inside a PS5).

The SN850X’s durability ratings (expressed in terms of lifetime write capacity in total terabytes written, or TBW) match the SN850’s for the two capacities they have in common. They’re the same as several other TLC-based speedsters—both the Crucial P5 Plus and the Samsung SSD 980 Pro are rated at 600TBW and 1,200TBW for 1TB and 2TB respectively. A few PCIe 4.0 drives offer substantially higher durability ratings; the MSI Spatium M470, for instance, is rated at 1,600TBW for 1TB and 3,300TBW for 2TB. At the other extreme, the budget-minded Mushkin Delta—which uses less write-durable QLC memory—is rated at just 200TBW for 1TB, 400TBW for 2TB, and 800TBW for 4TB.

The terabytes written/TBW spec is a manufacturer’s estimate of how much data can be written to a drive before some cells begin to fail and get taken out of service. WD warranties the SN850X for five years or until you hit the rated TBW figure in data writes, whichever comes first. 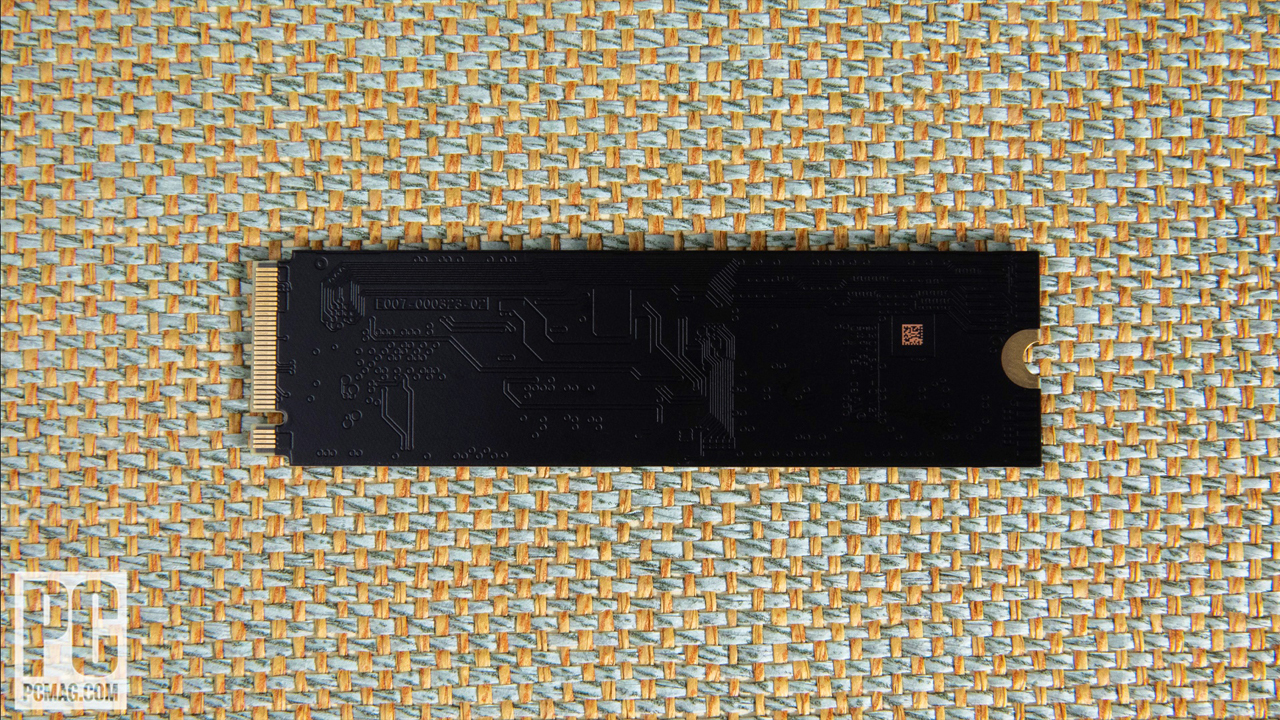 The abovementioned WD Dashboard utility is a free download that lets Western Digital SSD owners check drive status, perform software and firmware upgrades, run diagnostics, and erase the drive, as well as customize the RGB lighting behavior of drives that come with the illuminated heatsink. The utility also lets you activate Gaming Mode 2.0, which includes features such as predictive loading and caching of game elements, improved thermal management, and control of background functions. We ran our performance tests on the SN850X with this mode enabled. 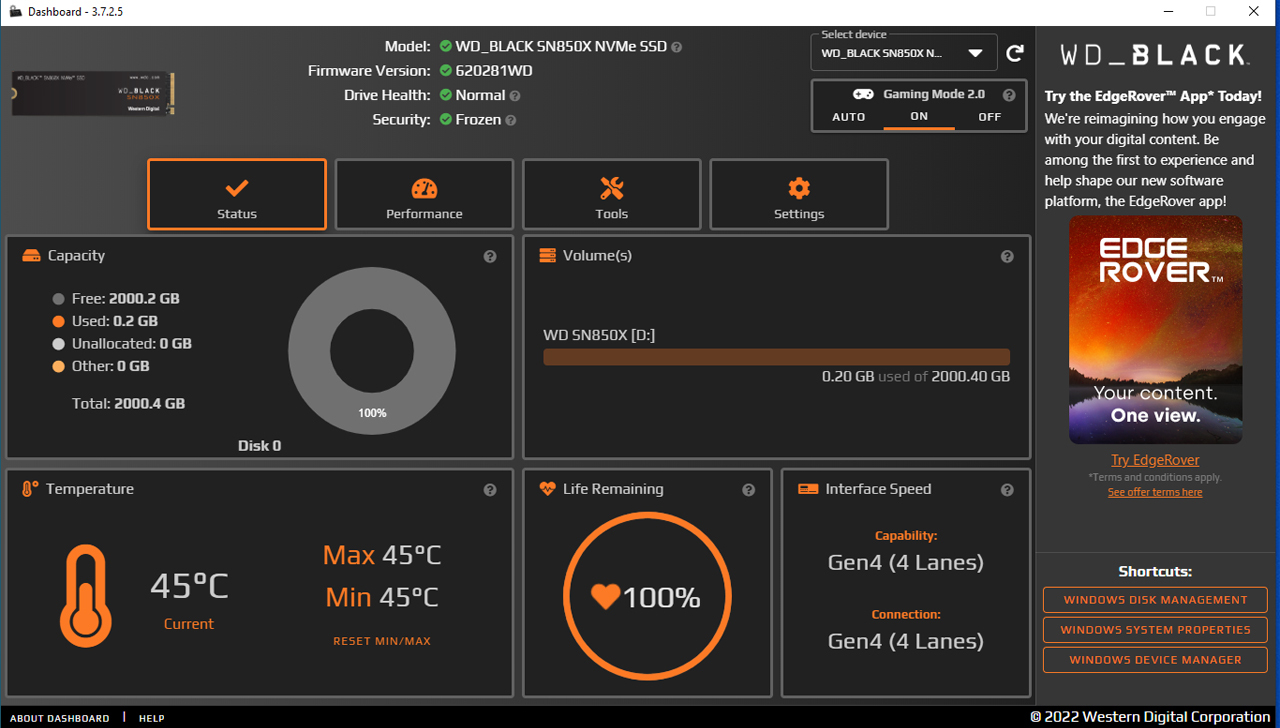 One thing the WD Black SN850X lacks is hardware-based AES 256-bit full-disk encryption, widely regarded as the gold standard for consumer SSDs. You’ll find it in some high-performance PCIe 4.0 drives including the Crucial P5 Plus and the ADATA XPG Gammix S70 Blade.

What’s more, the SN850X set a new high score in Crystal DiskMark’s 4K Write test, which measures how long it takes to save a group of files, each accessed in 4KB cluster sizes. It easily surpassed the next-fastest SSD, the Corsair MP600 Pro XT, in this test. 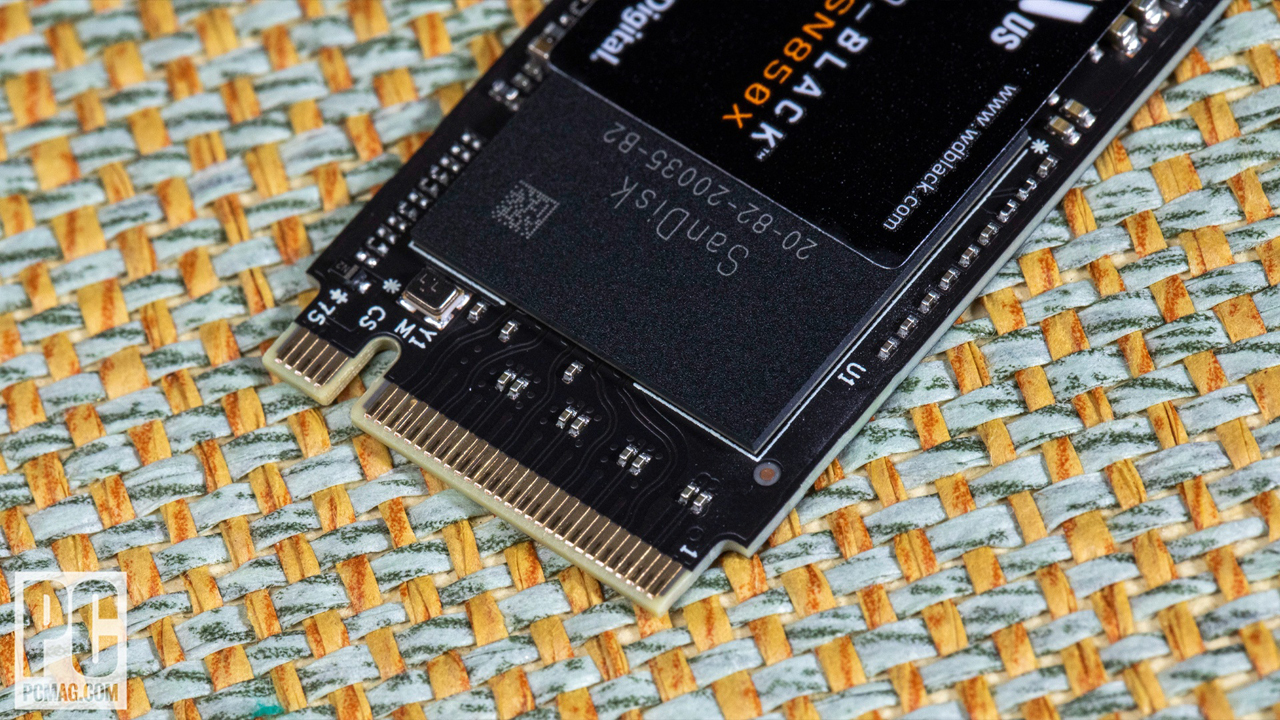 Next up, the PCMark 10 Overall Storage test measures a drive’s speed in performing a variety of routine tasks such as loading games and launching the Windows operating system and other programs. The SN850X took the silver medal in this test, trailing only the SK Hynix Platinum P41.

The WD Black also excelled in PCMark 10’s trace tests, which are some of the individual component scores that are aggregated to comprise the Overall score. It had the second-best score in the Windows 10 bootup trace and aced the gaming subtests, leading the pack in Call of Duty: Black Ops 4 and trailing only the Platinum P41 in Overwatch and Battlefield 5. It also took the gold medal in launching Adobe Premiere Pro and another silver in launching Photoshop, and led the way in ISO file copying.

Finally, in the 3DMark Storage test—which measures a drive’s ability to perform a variety of gaming-related tasks—the WD Black SN850X blew away the field with a new PC Labs high score, easily besting the SK Hynix and the “non-X “WD Black SN850. 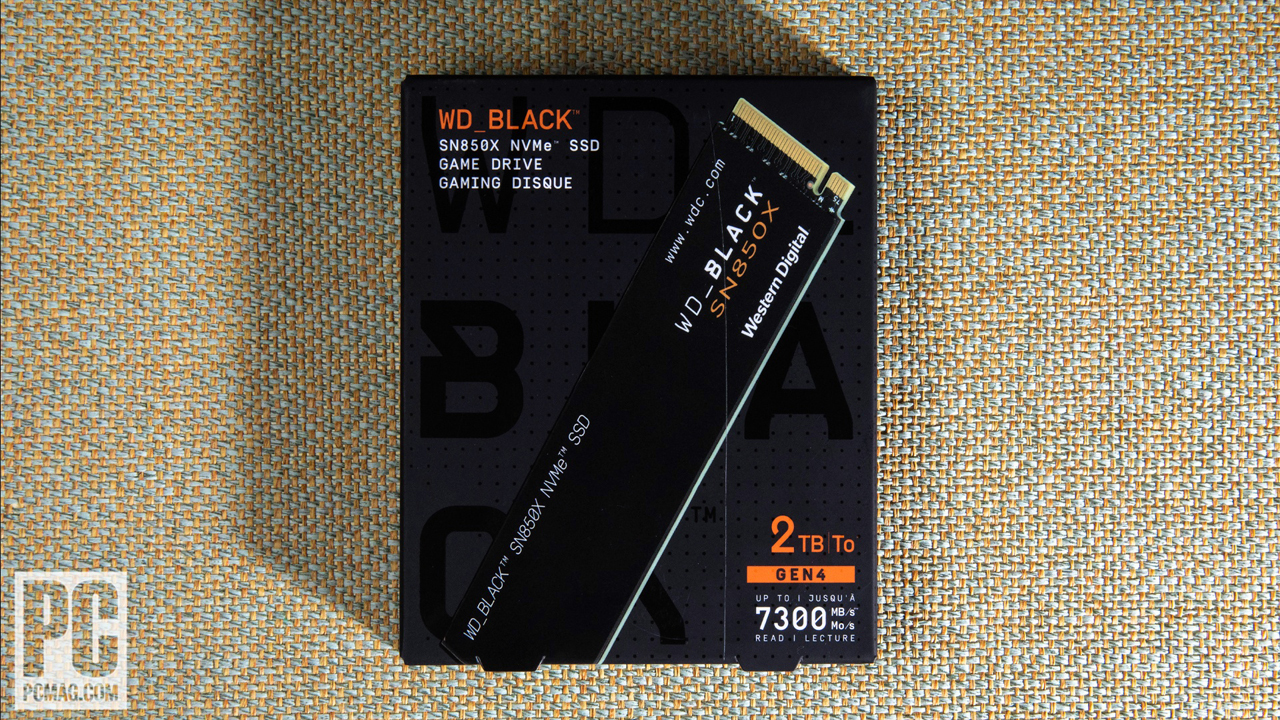 Overall, the SN850X gives the recently reviewed SK Hynix Platinum P41 a run for its money. The P41 broke benchmark records right and left, but the SN850X tipped past many of those results, winning the 3DMark gaming test by a wide margin. If data security is paramount for you, you might want a drive with AES 256-bit hardware-based encryption such as the Crucial P5 Plus, the ADATA XPG Gammix S70 Blade, or the XPG Atom 50. But none of those Editors’ Choice winners offers a heatsink version or a 4TB capacity.

The X-Factor Makes All the Difference

From its appearance or model number, you might think the WD Black SN850X is merely a lightly tweaked version of the older SN850, but the few changes under the hood have greatly enhanced its capabilities. Besides a new 4TB version, the SN850X offers a NAND upgrade responsible for higher sequential-read speeds and greatly increased sequential-write speed. Indeed, the SN850X delivered substantially improved benchmark results pretty much across the board, especially with its new high score in the 3DMark Storage gaming test.

Available with or without a heatsink, the SN850X is a formidable gaming drive but also excellent for use by performance-minded photographers and videographers. It claims our latest Editors’ Choice award among premium PCI Express 4.0 SSDs and duels the latest SK Hynix effort for drive supremacy.