High on Life will be bringing its absurd alien antics to Xbox Series X|S, Xbox One, PC, and Xbox Game Pass in December, and we had a chance to go hands-on and partake in its crazed shenanigans, and here’s what we thought…

December looks like it might be a bit of a crazy time for players on Xbox Series X|S and Xbox One, who’ll be whisked away to distant worlds in search of adventure… or death. The Callisto Protocol will be taking us on a terrifying adventure with alien monstrosities attempting to rip us to shreds, and High on Life will be… well, it’ll be doing pretty much whatever the hell it pleases by the looks of things, but it’s also themed around aliens, they’re just a little different.

High on Life is one of the two big titles to be launching straight into Xbox Game Pass in 2022, with the other being Obsidian’s Pentiment — check out our Pentiment first impressions to see what we thought. We were supposed to have been welcoming Starfield and Redfall to the service as well, but both were delayed into the first half of 2023 back in May. With no pressure intended, but most likely felt by the teams, it’s fallen to High on Life and Pentiment to carry the Xbox Game Pass banner to glory over the next couple of months. After spending some time with both games recently, though, I don’t think they should be too worried…

“Look how shootable I look; I look so shootable,” some random alien kid in a sewer sings. “Go ahead, do it… do it, fresh meat, do…” That was the first time I fired my gun in High on Life. I shot that alien right in his one cyclops-style eye and went on my way feeling pleased that the taunting had led to me teaching the silly creature a lesson. I did find out a little later on that the alien kid was actually thirty years of age, so morally speaking, I still had the high ground.

My 30 minutes with Squanch Games’ upcoming FPS were spent in a constant fit of giggles as I explored the small alien town and an underground sewer ghetto that was available to me. There wasn’t anything remarkably witty being said by any of the numerous characters I met, of which there were a fair number; it was just the constant barrage of ridiculous dialogue I was confronted with. I would quite happily describe myself as a ‘man-child,’ thanks to my ability to find the funny in almost any situation, no matter how terribly silly it is. High on Life fed into that, and thanks to a roster of characters that have next to no filter, I was abuzz with joy from the moment I sat down. 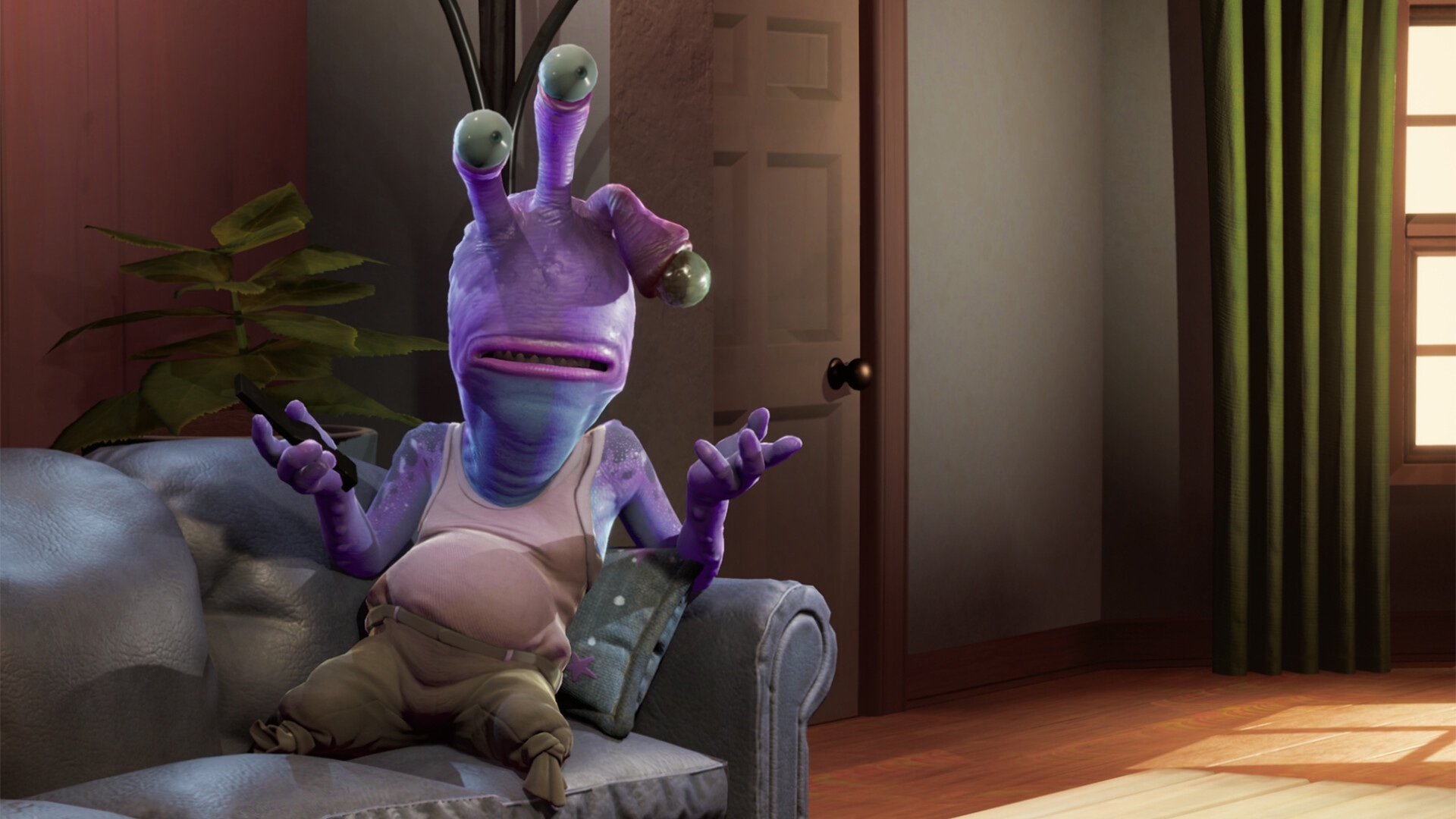 If you’re someone who doesn’t enjoy the humor found in shows like Family Guy, American Dad, or Rick & Morty, then I’m not sure if you’ll enjoy even the first five minutes of absolute mouth garbage that’s thrown at you. If you do enjoy it, though, you’re in luck because the co-founder and CEO of Squanch is Rick & Morty co-creator Justin Roiland — yeah, you’re probably going to love this from the get-go.

From the session I played, the protagonist was silent, with only the alien gun doing all of the talking, and he loved to comment on almost everything I came across. The game opened in a normal-looking house, aside from the big potty-mouthed purple alien sitting on the couch, as our character was getting ready to become an alien-hunty bounty hunter. The one mission saw me find my way into the town’s sewers to a ghetto-like area in search of a bug-style alien gangster. 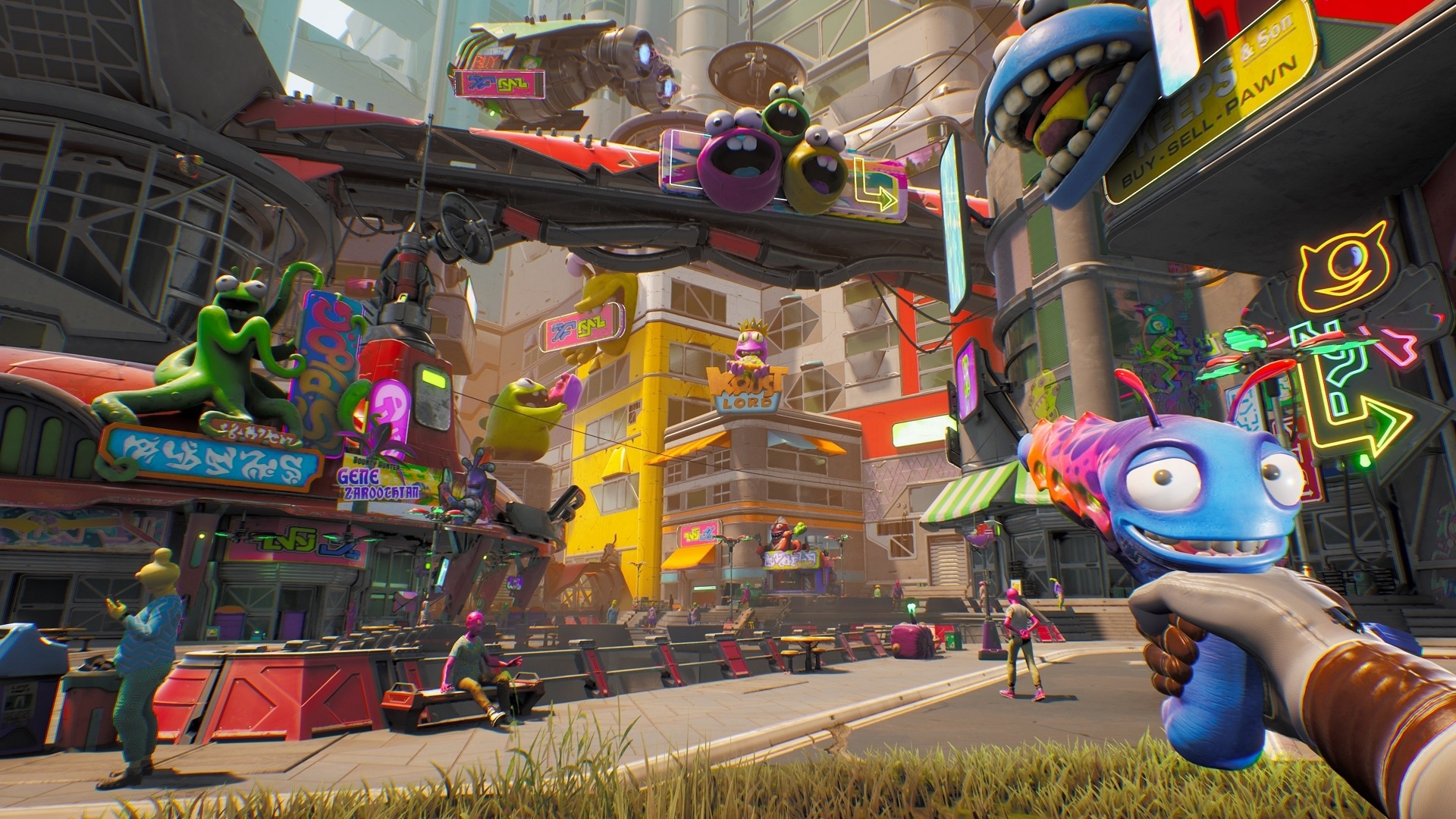 From the get-go, you’re given the ability to detect and highlight your objectives instead of a traditional mini-map. It’s a nice touch that leaves the game’s UI clutter-free so you can enjoy the vibrant world around you. It really is vibrant too; everything in the city pops with color and it’s clear to see Roiland’s cartoon-background playing a large part in how High on Life has been brought to life. Even the ghetto-like sewers are filled with colour, such as the luminous green sewage that acts as a toxic lake in the town’s underbelly.

The vibrancy of the alien world extends to the combat as well, with both your strange living gun and the enemies shooting brightly colored balls of goo at each other. Combat in High on Life feels very similar in style and tone to Journey to the Savage Planet, aside from the fact that your gun talks to you throughout. Once you get the knife, which also has its own colorful personality, you can use it to tether around the world while causing enemies’ heads to explode from your goo gun. The knife’s personality is a little more on the violent side, but hearing them both together during the session painted a clear picture in my mind of what we can expect in the full game—unadulterated verbal carnage. 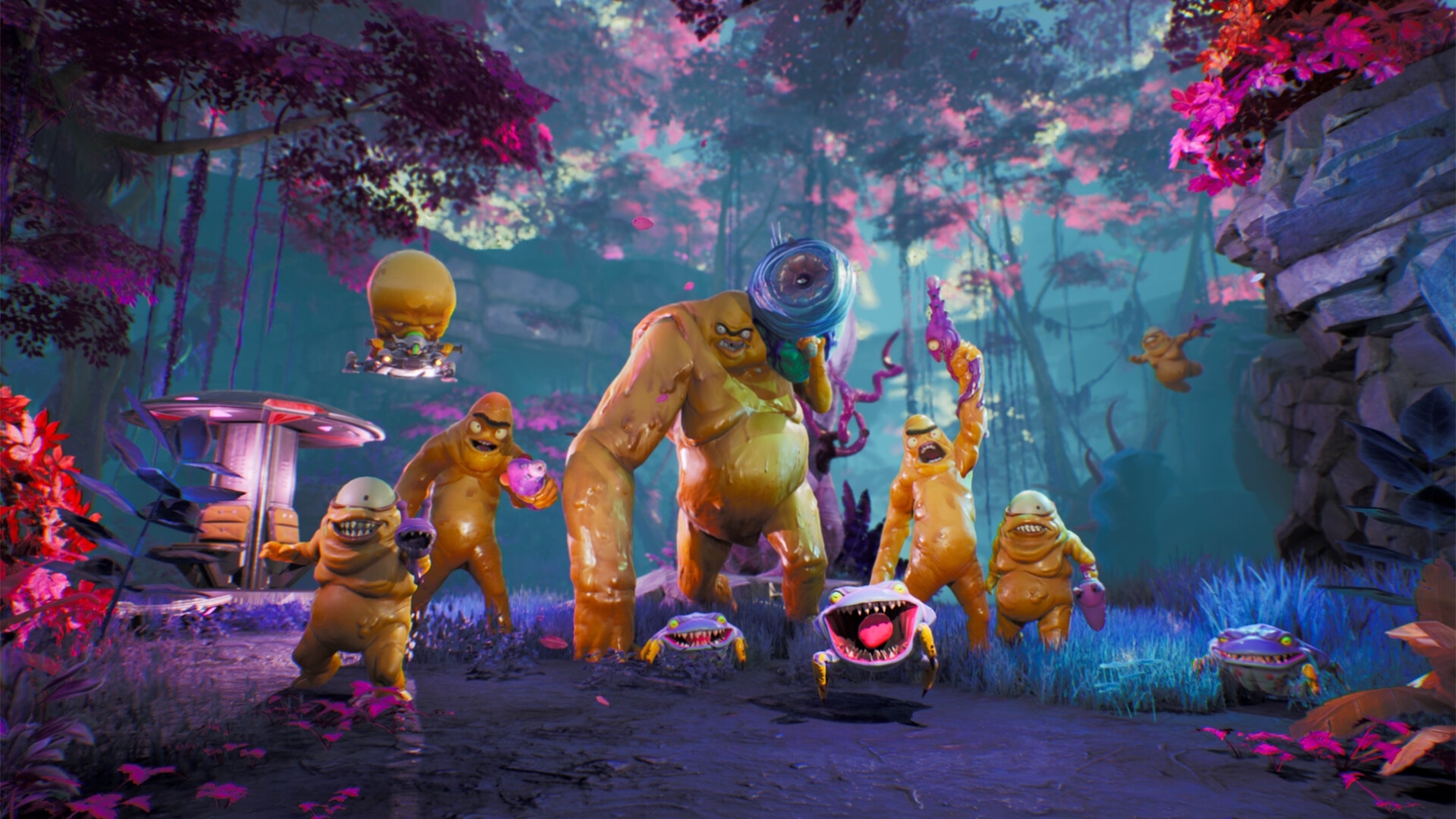 High on Life is crazy good fun to play and offers a comical adventure that I’ll definitely be looking forward to playing when it launches on December 13th. It’s vibrant, playful, full of character, and doesn’t seem afraid to push its luck — the kind of thing we’ll probably need after a session playing the month’s big horror release.

What do you think about High on Life so far? Is it appealing to your inner child, or would you rather skip it and keep your sanity? Drop a comment below and let us know… or let your gun do the talking for you!